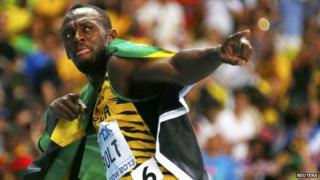 The six-time Olympic champion overtook Justin Gatlin in the final stages of the race in Russia, forcing the American to settle for silver in 9.85 seconds.

It was another massive victory for the sport's brightest star, who got the eighth-fastest time of his career, despite heavy rain.