Bird of prey at risk of extinction in UK 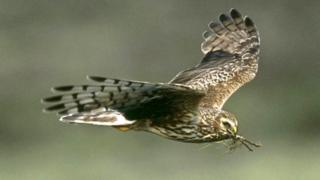 One of the UK's birds of prey - the hen harrier - is at risk of extinction.

Conservationists say there are only two nesting pairs left in Britain and they have failed to breed.

The Royal Society for the Protection of Birds (RSPB) says it's the first time the birds have not produced a chick in about 50 years.

The charity said they think the fact that the birds prey on grouse has affected their numbers, because landowners protect the grouse on their land - making it difficult for the hen harriers to feed.

The RSPB support a plan to bring in different food sources for the hen harriers, so they don't rely on grouse for food.