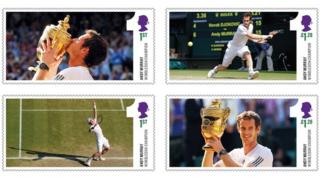 The book of four stamps feature four different pictures of the tennis star during this year's Wimbledon tournament.

Murray became the first British man to win the singles title in 77 years when he beat number one seed Novak Djokovic in straight sets.

Andrew Hammond from Royal Mail, said: "We are thrilled for Andy and are delighted to mark his wonderful achievement by issuing a set of special stamps.

"His historic win at Wimbledon has made the nation proud, and we can now celebrate his success with this new stamp issue." 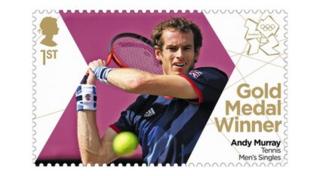 Andy Murray also featured on a stamp as part of a series celebrating the London Olympics.

This is the second time Murray's achievements have been marked by a Royal Mail stamp.

A gold medal stamp was issued to mark his win in the men's singles at the London 2012 Olympic Games last summer.

Murray is now back on court and has just taken a straight sets victory at the Montreal Masters. He beat Spain's Marcel Granollers 6-4 7-6 in his first match since Wimbledon.