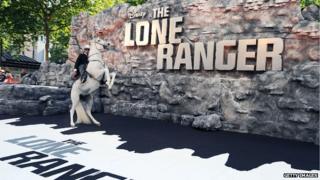 Disney has been warned that its Lone Ranger blockbuster will lose between £104 million and £124 million.

It's after the company spent a lot of money on promotion for the film, but not many people have been to see it.

It stars Johnny Depp and had its American premiere in early July, and it will be in UK cinemas this weekend.

The amount of money the movie made in its opening weekend in the US and Canada is thought to be weak for a blockbuster.