Would you eat a lab-grown artificial burger? 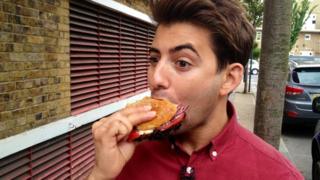 An artificial burger made by scientists in a laboratory was revealed in London - but would you eat it?

Growing meat in labs could be kinder to the environment and reduce animal suffering because animals wouldn't need to be killed to make the burgers.

It may even taste good! One food critic tried the first lab-grown burger and said: "It's close to meat, but it's not that juicy".

We asked you whether you would eat a lab-grown burger, if it tasted just like meat? Or would you prefer to eat a proper beefburger like Ricky?

This chat's now closed but you can read a selection of your comments below.

I definitely would give it a try! Especially if it tastes like real meat. If it does lack some juice then I don't mind if that means the animals are going to live! If it does taste exactly like real meat then why would people want to kill animals for the sake of it?

At least this way you know there would be no horsemeat in your burger.

I would never eat a lab-grown burger because scientists don't yet know if there could be side effects from eating these burgers in the future. I think I'll just have a regular beef burger.

I would eat a frankenburger as it is saving animals and I am against animal killing for meat and it will also save cows meat being mistaken for horse!

I think I might eat it, but they better change the name because I wouldn't eat a frankenburger!

I would eat the lab-made meat because it sounds and looks yummy. Also they have been growing it for 5 years so they seem to know what they are talking about.

I would eat a lab-grown burger! It may be a bit different and a little bit strange, but it will help the environment and some animals that we get meat from! It also would be great to try something new!

I would! I'm vegetarian. It would make me seem normal. And, if it's going to end world hunger, I don't see what all the fuss is about!

I would eat it because I love burgers and I love science, what a mixture!!!