What do you think of the new Doctor? 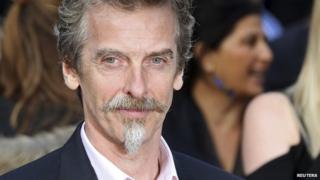 Scottish actor Peter Capaldi has been revealed as the new time-travelling Doctor in Doctor Who.

Peter will join actress Jenna Coleman in the Tardis when he records his first scenes in autumn.

Lots of you contacted Newsround to tell us what you thought of the announcement.

Even though I liked Matt Smith more than any other Doctor, I think Peter Capaldi will do a really good job! I hope that he will do better than Matt Smith. Good luck Peter!

So sad that Matt Smith has gone but hopefully the new Doc' will be just as good!

It's sad that Matt Smith is going but it's exiting too because we get a new Doctor!

I don't think that he looks like a Doctor even though I don't watch Doctor Who all the time. I still think that Peter shouldn't be the new Doctor Who but I want to see what Peter is like in action.

I really like Matt and will miss him as the Doctor but I think Peter Capaldi will be good and I won't judge him until he starts playing the role.

I think he seems nice, but I don't think he's young enough because lots of youngsters started to watch Doctor Who because Matt Smith was much more lively, but now we are going back to when the Doctor is older, so i think it will put some younger people off.

I think they made a great decision but I'll miss Matt. I think it's unfair that people are judging Peter before they've seen what he is like as the new Doctor.

I think he really deserves to be the Doctor, and I don't know how he managed not to tell anyone! I would've told EVERYONE!

I'm really impressed with the choice! As a true whovian myself, I was really worried that it would be someone a bit impractical for the role!

I think that it depends if he's goofy like Matt Smith, the Doctor's personality changes and this one should be more reserved, although as a comedian he would be good at both!

Stop comparing him to Matt Smith! I think he will be good but in his own way!

I think it is a good as well as a bad choice. I was hoping that there would be a female doctor but I also think Peter Capaldi is the perfect man for it too.

I think Peter Capaldi is like an older version of David Tennant! I can't wait to see him as the Doctor because he's a really good actor! I think this was a good choice!

I don't really like him and I just can't picture him fighting Daleks or coming out of the Tardis. I honestly think they should bring back David Tennant or a woman!

So sad that Matt Smith has gone but hopefully the new Doctor will be just as good!

I think Peter Capaldi will be good but I think Rupert Grint should be the Doctor next. Nobody will ever be as good as Matt Smith.

I think Peter Capaldi will do a fantastic job and I'm glad we've got an older Doctor - hopefully he'll be a bit more serious and not as mad!

I think it is bad because he has already been in Doctor Who.

I like him! He looks really funny! But my favourite Doctor is still David Tennant!

I think he's great, he has a really mystifying voice and tall scary figure.

I'm sure he is a great actor but I had someone else in mind - Daniel Radcliffe!

I'm so happy that Peter was chosen! At first I didn't like him much but now I think he'll be perfect! Really sad to see Matt go as he was my favourite Doctor.

I think they made a perfect choice and I can't wait to see him in action. Good luck Peter.

I don't really know Peter Capaldi and I would have wanted it to be a well known face.

I think it was a good decision because he has already been in it before so he knows a bit about the programme.

I think Peter Capaldi will be a great Doctor and I'm glad they choose him, although I'll miss Matt Smith.

I don't like the new Doctor because he doesn't look right!

I think he will be a good Doctor because he has already been a comedian.

I have never heard of him - but then before Doctor Who I had never heard of Matt Smith, so it may make peter famous. I'm sure it is a good choice but I feel sorry for him as he will be compared to Matt Smith.

The Doctor needs to be someone darkening and evil - Peter is a perfect choice!