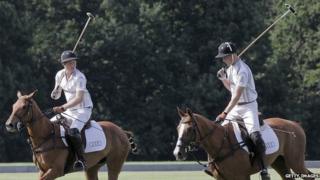 The Duke of Cambridge has made his first public appearance since the birth of his son, Prince George, just under two weeks ago.

Prince William took a breather from being a new dad to play in a charity polo match.

After the game he was presented with a child's polo mallet.