What would you do if you were the new Doctor? 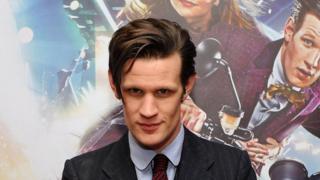 The wait is nearly over for Dr Who fans desperate to find out who will be taking over from Matt Smith as the new time lord.

The new Doctor will be announced in a brand new special live programme on BBC One at 7pm tonight.

We want to know what you'd do if you were picked as the new Doctor.

Would you take the Daleks on? Would you make peace with the Cybermen? Or perhaps you'd go on a journey in the Tardis.

Let us know what you'd do first if you were picked.

I would go back to the past and try to change Matt Smith's decision to quit.

I would travel back in time to when there where dinosaurs and I would change the Tardc pink!!!

I would travel through time and space to be witness to all the great events in the universe and I would take my best friend along for the ride too!!

If I was the new doctor I would destroy the weeping angels with all the past companions.

If I were the doctor I would try to bring the all the other time lords back.

I would go into the future and find out the lottery numbers and win the money today.

If I was selected as the new doctor I would invite all my friends over and choose one for my new companion.

I would paint the inside of the Tardis purple and orange and then travel through the vortex before holding an evening tea-party for all the companions.

I would start the new Tardis up right away and look for a new companion. Then travel the solar system and probably find a troublesome alien lurking on a moon.

I would go to fight the weeping angels

If I were the Doctor I'd revamp The Tardis and get a newly designed Sonic Screwdriver. I'd have a serious side but aspects of comedy in me. I'd choose my favourite parts of the old Doctors and use them.

I would will try to save the world from EVIL!!!!

If I was the doctor, I'd try and make an army of fighting and disco daleks on my side.

I would fight monsters, go on a journey in the Tardis and go on adventures. If I was picked I would be shocked, but I would try to be the best girl doctor and time lord ever!

I would try and change the design of the sonic screwdriver so it is twice as strong as before.

If I were the doctor I would go back in time and get all the companions back for tea party and a swim in an Olympic size swimming pool!

I would save the world and I would also change my screwdriver. I would design a new Tardis.

I would ask my friend to be my assistant.