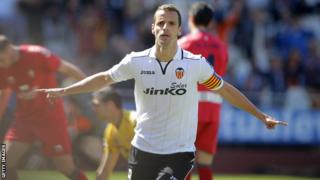 The Valencia forward scored 30 goals in 46 games last season and will sign a four year deal after a medical on Friday.

Meanwhile Spurs are facing an uphill battle to hold onto star player Gareth Bale after Real Madrid manager Carlo Ancelotti revealed the two clubs were in talks over an £85m move.

Bale is reported to have told Spurs he wants to leave but Tottenham chairman thinks the Welshman could be worth more than £100m.