Fracking: What is it and how does it work?

Fracking for shale gas is due to start at a site in Lancashire, since being given the go-ahead by the government back in 2016.

Over the last two years, campaigners have tried to stop it from happening, arguing that Lancashire County Council had not properly assessed the safety risks.

But the High Court has said there was "no evidence" to support this.

Protestors have also argued that the process is damaging to the environment.

Energy firm Cuadrilla has drilled two wells at its site in the north-west of England and fracking is due to get under way on Monday 15 October .

More about the environment

Can slime be eco-friendly?

What does fashion have to do with the environment?

Hydraulic fracturing - or 'fracking' - is a technique used to capture a type of gas found deep underground in shale rock.

Shale gas is trapped inside tiny pockets of rock, which makes it hard to reach.

But recent developments in technology have now made it possible to capture shale gas. 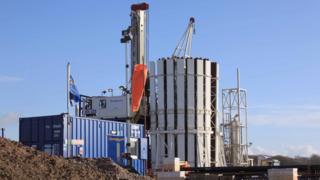 Getty Images
This test drilling rig near Blackpool was the first in the UK boring exploration holes 4,000 feet deep

Fracking works by drilling straight down and turning the drill horizontally for miles underground.

The aim is to reach the tiny pockets or cracks in the shale rock where gas molecules are locked away.

Water is pumped down to widen these pockets, and the gas is then released and brought up to the surface.

What are the benefits? 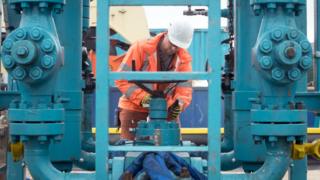 PA
A worker at the Cuadrilla fracking site in Lancashire, where fracking is due to begin on Monday. The site at Preston New Road is the UK's first horizontal shale gas well

The way the UK currently generates energy can't carry on forever, so new methods are needed.

Energy companies say fracking would help to give the UK a major source of fuel for the future.

Currently most of our gas is imported from other countries - and that is expensive.

Fracking in the US and Canada has resulted in finding enough gas to last about 100 years.

It's also thought that generating electricity from shale gas produces about half the carbon dioxide emissions compared to coal power.

Why are people against it? 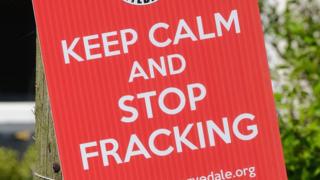 Some people are worried about fracking because they think it's too dangerous.

Water companies have said that drinking water could be contaminated with methane gas and chemicals.

Fracking also uses huge amounts of water that must be transported to the fracking site, which has an environmental impact.

There is also a concern that fracking can trigger minor earthquakes. 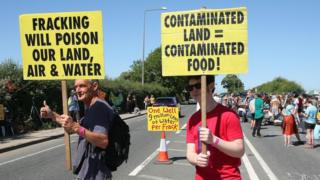 Getty Images
People have been protesting at the Lancashire site - for example, these campaigners holding up signs claiming that fracking causes contamination

It's thought two small earthquakes of 1.5 and 2.2 magnitude in the Blackpool area in 2011 were caused by fracking - but this hasn't been proven.

Campaigners think money should be invested in renewable sources of energy, such as wind power.

What does the government think?

In 2016, the government gave its backing for fracking to go ahead in the UK.

A review done by experts for the government in June 2012 found that the risks from fracking could be managed, as long as it was done properly.

Any company that wants to begin fracking must apply for a licence before they can do so.

Gas fracking gets go ahead

'Fracking' for gas to carry on, leaving people angry