A quiet village in the south of England has become the centre of a national row over fracking plans - a controversial way of getting gas from underground.

Energy company Cuadrilla had planned to do some drilling tests at a woodland site near Balcombe in West Sussex.

But campaigners from all over the country have gone to the village to protest against it. Demonstrators have been camped out for seven days. 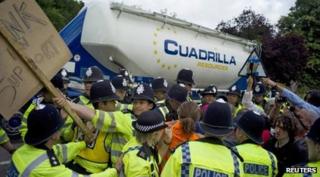 Reuters
Demonstrators try to stop police officers and a lorry

Around 100 police officers are now at the site.

Cuadrilla has said it would need further permission before fracking could take place.

Fracking involves drilling holes deep into the ground, then causing tiny explosions to release the gas trapped inside the rock.

Fracking guide - how does it work?

The government has given fracking its backing. Supporters say fracking would mean the UK would not have to depend on fuel from other countries, which is expensive.

But some people think it's too dangerous, as it could pollute local water supplies and even cause minor earthquakes.