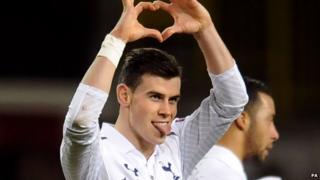 Could Tottenham's Gareth Bale be waving goodbye to the Premier League?

Reports suggest that the PFA Player of the Year wants to talk to Real Madrid about a transfer.

There's not been a formal offer yet from the Spanish club, but Spurs have said Bale is not for sale - even if they get a world record bid of £85 million!

Bale has three years left on his Spurs contract. He joined them from Southampton for £10 million in 2007.