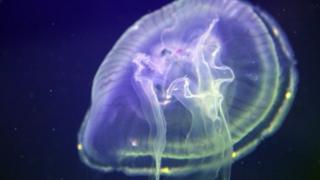 If you're heading to the beach this summer, then watch out for jellyfish!

The Marine Conservation Society (MCS) say jellyfish sightings around the UK have gone up in June and July because of the hot weather.

Beachgoers may come across the blue jellyfish, the compass and moon jellyfish - as well as the rarer Lion's Mane and barrel jellyfish.

The MCS is asking people to report sightings for their annual jellyfish survey.

Dr Peter Richardson from the charity said: "We would expect if the weather continues like this then you'll be getting lots of jellyfish around the UK, all the way through 'til sort of September, October.

"Compass jellyfish and the blue jellyfish can give you a fairly mild sting; not as bad as the Lion's Mane jellyfish... those, apparently if you get stung by them, it feels like you're getting an electric shock."