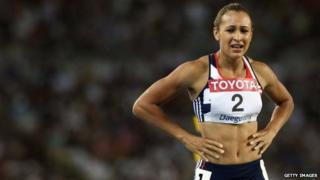 Jessica Ennis-Hill has withdrawn from the Great Britain team for the World Championships in Russia's capital Moscow with an Achilles injury.

The Olympic heptathlon champion struggled with injury all season, though she did compete in the long jump and hurdles at the Anniversary Games.

The 26-year-old said on Saturday that she was not sure she would be fit in time for the mid-August competition.

"To say I am gutted is an understatement," she said.

"No athlete likes to miss the opportunity to compete at a major championships - they don't come round that often."

Ennis-Hill's participation at the Anniversary Games was only her second competitive appearance since winning gold at London 2012 - she finished fourth in the 100m hurdles and eighth out of eight in the long jump as she tested her fitness.

"Up until now we have been focusing on managing the pain so I can train and get myself in shape to win in Moscow," she said.

"The time has now come to stop chasing fitness and look to cure the problem."