Mo Farah v Usain Bolt - who would win the race? 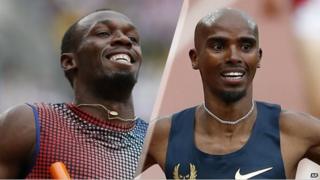 Mo Farah has challenged Usain Bolt to a race - but who would win?

Farah usually runs long distances over 5,000m while Bolt competes in the 100m and 200m sprints.

Bolt has already said that 1,500m would be too far.

So which athlete would have the upper hand (or foot)?

He told Newsround: "At that distance it's an aerobic event... top speed won't matter."

The difference lies in how efficiently the leg muscles can produce energy from oxygen, which becomes more important in distances over 400m.

"Sprinting is really simple as an activity. You want to get up to maximum speed as quickly as you can and then run as fast as you can through the line," explained Prof Fowler.

So the winner of the star-studded race?

"Every day of the week Mo Farah would win that race over 600m," says Prof Fowler.