Which sports stars would you like to see go head-to-head? 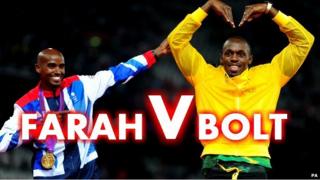 During an interview with Sky News, Mo asked Bolt if he was up for a race, and Bolt said: "I'm up for anything!"

Farah usually runs long distances like 5,000 metres while Bolt competes in the 100m and 200m sprints.

Bolt said if the pair were to race it would have to be a distance somewhere in between, like 600m.

Which sports stars would you like to see go head-to-head?

Farah and Bolt aren't the only sports stars up for a friendly competition.

We asked who would you like to see go up against each other...

I would love to see Usain Bolt v Steven Gerrard in an opera singing competition. That would be really funny!

I think Jessica Ennis-Hill vs Tom Daley, to see who can do the best catwalk.

I would like to see Ronaldinho Vs Neymar Jr because they're both skilful players and are the best football players ever - and as a bonus they're both Brazilian!

I'd like to see Usain Bolt and Tom Daley having a competition to see who can eat the most doughnuts without licking their lips.

I would like to see Jessica Ennis-Hill challenge my PE teacher to a running race - it would be hilarious!

I would like to see Beth Tweddle vs Nicole Hibbert in a competition to see who can keep their eyes open without blinking for the longest!

I would like to David Weir and Hannah Cockcroft racing each other as they are both Paralympic gold medallists.

Messi vs Ronaldo would be a pleasure for me! Both are very skilful and have good quality so it world make my day to watch them!

I think Dodge and Hacker should have a dance off and see who wins!

I would like to see Usain Bolt and my head teacher doing a 200m sprint as she can run quite fast, even in her wedges or high heels!

I think that Mo Farah vs Usain Bolt will be good although they should do a sleeping race where we see who can sleep the longest!!

I would like to see Cristiano Ronaldo vs Gareth Bale to see who has the best skills!

I want to see Jessica Ennis-Hill vs my teacher at a film war where they both watch as many films as they can, until one doesn't want to watch any more films!

I think David Beckham and Steven Gerrard should have a dance-off to see who's best!

I think Usain Bolt should race Mo Farah - but on mobility scooters.

I think Mo Farah and Zara Phillips should have a race but not a running track or a horse. I think they should have a swimming race and a badminton mach and see who wins!