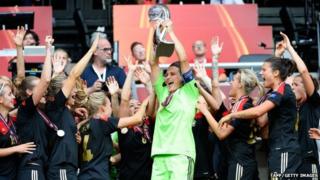 Germany are celebrating after winning the Women's Euros for the SIXTH time in a row!

The game's only goal came from German substitute Anja Mittag.

Despite their long-running success, Germany haven't been on top form at Euro 2013. They scored just six goals in six games and were even beaten by Norway in the group stage.

Germany have now won every Women's Euro tournament since 1993!