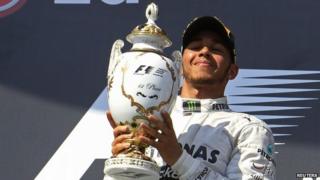 Despite worries about tyre problems, Hamilton dominated the race - beating Kimi Raikkonen of Lotus into second.

"I think this is probably one of the most important wins of my career," said Hamilton. "I really couldn't be happier and I hope there is many more to come."

He dedicated his win to ex-girlfriend and X Factor judge Nicole Scherzinger.

The couple split up earlier this month.

Hamilton left McLaren and joined Mercedes this season after signing a three-year deal.