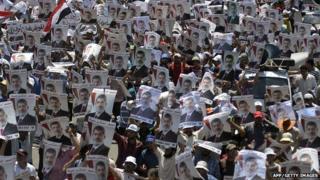 Supporters of Egypt's former president Mohammed Morsi are refusing to end their sit-in protest at a mosque in Cairo.

At least 72 protesters were killed in battles with security forces on Saturday.

The demonstrators want Mr Morsi from the Muslim Brotherhood to be put back in power. He was removed from office by the army on 3 July.

A government minister has warned that the protest would soon be broken up.