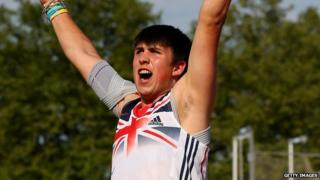 The 15-year-old from Cheltenham threw 13.38m on his fifth attempt, beating the previous world record by 28cm.

Competing in his first major international tournament, Scott said: "I knew I could go over 12m but I didn't expect to throw a world record and beat the previous holder."

Sixteen-year-old Sophie Hahn broke the world record in the T38 100m on Wednesday at the event in Lyon, France.