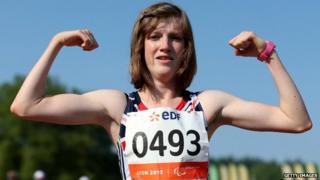 Sixteen-year-old Sophie Hahn has stormed through to a record-breaking victory in the T38 100m at the IPC World Athletics Championships.

The teenager from Nottingham, who has cerebral palsy, only started off in athletics earlier this year and was competing in her first major championship.

And after winning a silver in Monday's 200m race, she went one better over the shorter distance, winning in 13.10 seconds - 0.09 seconds faster than the world record!

Her win was Great Britain's 10th gold medal at the event in Lyon, France.