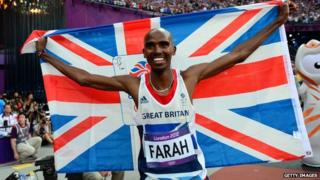 Mo Farah is the most inspirational London 2012 sports star for British children, according to a survey done for Newsround.

The survey suggests the double gold medal winner inspired the most kids during the Olympics and Paralympics.

Ellie Simmonds, who won four medals including two golds at the London Paralympics, came in at number four.

The survey carried out 1,645 online interviews with boys and girls aged eight to 12. They picked their most inspirational sportspeople from a list of prominent GB Olympic and Paralympic athletes.

It also found that children are playing more sport since London 2012.