One Direction break Vevo record with Best Song Ever 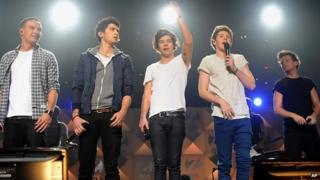 One Direction's new video for their single Best Song Ever has become the most-watched video on Vevo during its first day.

It broke the record by racking up a whopping 12.3 million views in just 24 hours.

The video sees the 1D boys take on the roles of different characters.

Niall said to fans: "You guys broke the Vevo 24 hour record! Wow! Thank you so much!"

Best Song Ever will feature in their upcoming film This Is Us.