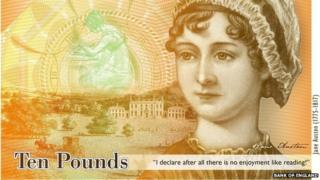 Author Jane Austen is going to feature on a new Bank of England £10 note.

She is famous for writing books such as 'Pride and Prejudice' and 'Sense and Sensibility'.

The Bank of England was criticised earlier in the year when it announced the only woman on a banknote, Elizabeth Fry, would be replaced by former Prime Minister, Sir Winston Churchill.

The note will not be available until 2017.

The Bank of England says it regularly changes the people on its banknotes to stop them from getting worn out, and to stop people trying to make fakes.