Prince William still working on a name for royal baby

The Duke and Duchess of Cambridge have emerged from hospital with their new baby son.

Walking out of St Mary's Hospital in west London with their son to cheers from well wishers, the Duchess said it was "a special time for any parent".

Prince William said they were "still working on a name".

The couple went back inside the private Lindo Wing and placed the child in a car seat. The duke drove his family away towards to Kensington Palace.

Speaking to reporters, the couple both said the experience was "very emotional".

They appeared relaxed and smiled broadly in front of the world's media as they walked out on to steps of the hospital in front of a mass of photographers. 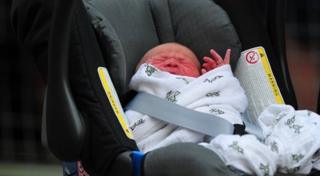 William later held his son and walked forward with his wife to speak to reporters.

He said: "He's got a good pair of lungs on him, that's for sure. He's a big boy, he's quite heavy. We are still working on a name so we will have that as soon as we can."

He added: "It's the first time we have seen him really so we are having a proper chance to catch up."

The Duchess, smiling as she held her son, said: "It's such a special time. I think any parent will know what this feeling feels like." 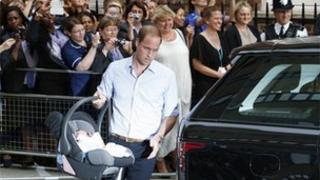 Speaking to the waiting crowd, Prince William said: "I'll remind him of his tardiness when he's a bit older.

"I know how long you've all been standing here so hopefully the hospital and you guys can all go back to normal now and we can go and look after him."

They also revealed William had done the first nappy change.

Pictures: How the world is celebrating the royal baby

In a statement, the couple said: "We would like to thank the staff at the Lindo Wing and the whole hospital for the tremendous care the three of us have received.

"We know it has been a very busy period for the hospital and we would like to thank everyone - staff, patients and visitors - for their understanding during this time."

At around 5.30pm on Tuesday William's father the Prince of Wales, arrived with his wife the Duchess of Cornwall at St Mary's Hospital to visit the young family.

Kate's parents, Carole and Michael Middleton, also visited the couple at the hospital on Tuesday afternoon.

As they left St Mary's Hospital, Kate's mum Carole Middleton said the baby was "absolutely beautiful" and the parents were "doing fabulously". 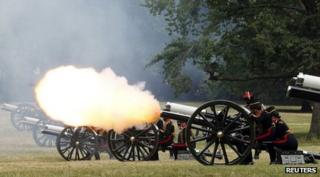 A gun salute has taken place in London to mark the birth of the Prince of Cambridge and Westminster Abbey's bells have been ringing all afternoon.

The royal baby was born weighing 8 lbs and 6 ounces in St Mary's Hospital in London and is third in the line to the throne.

The Prince of Cambridge, as the baby will be known, moves ahead of Prince Harry in line to the throne, because the law on royal succession has been changed.

A royal baby poem by Eloise

Congratulations on your baby boy!

I am sure he will bring much joy.

Before you know it, he will be King.

We are all excited you, me and the rest.

A royal baby, the very best.

Kate and William, you must be proud.

Thousands of people went to Buckingham Palace when the news broke to see the announcement of the baby's birth on the easel on Monday evening.

Following the announcement, a statement from Kensington Palace said: "The Queen, The Duke of Edinburgh, The Prince of Wales, The Duchess of Cornwall, Prince Harry and members of both families have been informed and are delighted with the news."

The baby's name is yet to be announced but there's plenty of speculation about what it might be called.