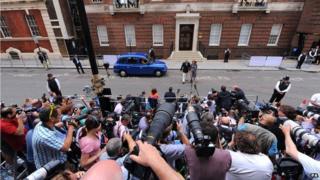 Take a look at some facts about the royal baby in numbers!

1 - he's only just been born but he already has his own Wikipedia page!

3 - journalists were camped outside the hospital for almost three weeks before the birth of the baby.

43 - the royal baby would be the 43rd monarch after his grandfather and father.

100 - born weighing 8 lbs 6 ounces, the royal baby is heavier than average. The average weight of a baby boy is 7 lbs and 8 ounces. He is also the heaviest royal baby to be born in 100 years!