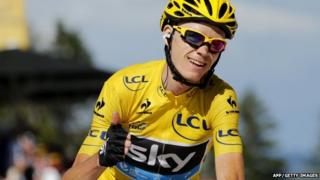 He leads by over five minutes going into Sunday's final stage of the gruelling three-week competition.

By tradition, the leader is not challenged on the last stage - making the ride from Versailles into Paris more of a victory procession.

"I can't quite believe I'm sitting here in this position," said Froome. "It really is amazing."

Wiggins made history last year when he became the first ever British winner.

He was ruled out of taking part this year in May due to illness and injury, although Team Sky had already said Wiggins wouldn't lead the team at this year's tour.