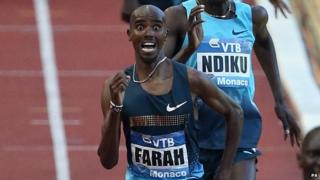 Mo Farah has broken a 28-year British record in the 1,500m - even though he came second in the race!

He finished in three minutes and 28.81 seconds at the Diamond League in Monaco - just over a second behind the winner, Kenya's Asbel Kiprop.

"I'm pleased, it was weird competing in a new event," Farah said.

He took part to test himself to improve his speed ahead of next month's World Championships in Moscow, Russia.