Best Song Ever: Louis from One Direction's character 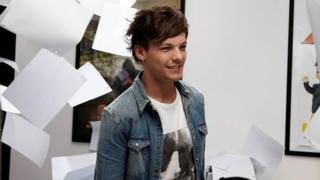 One Direction have been transformed into different characters for their new single Best Song Ever.

Each day their alter-egos are being revealed on Twitter. A picture of Louis has been released, surrounded by sheets of paper, by their record label on Friday. Mysterious.

Niall was transformed into a balding businessman on Tuesday.

Harry rocked out in glasses and a waistcoat on Thursday.