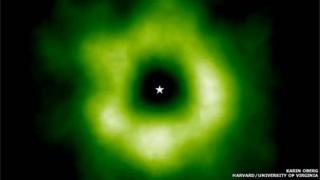 We might be enjoying a heatwave here on Earth in the UK, but in one part of space astronomers have snapped snow!

Astronomers using the new Atacama Large Millimeter Array (Alma) telescope have taken the first ever image of a snow line in an infant solar system.

It's around a young star called TW Hydrae, 175 light years away from us.

The snow line is the area around the outer reaches of the solar system where it's cold enough for molecules to freeze. 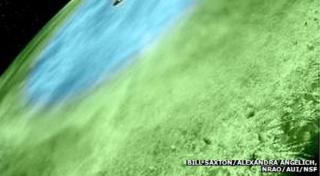 Artist's impression of the snow line

Snow lines are thought to play an important role in the making of new planets.

They give dust grains - the building blocks of planets - a frosty and sticky outer coating, which stops them from colliding and self-destructing.