Good news for puffin birds - they're making a comeback on the Farne Islands in north-east England.

A count on the habitat off the Northumberland coast shows there's been an 8% increase since the last count in 2008. 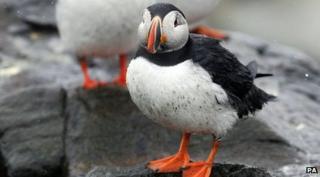 There had been worries after thousands of them died in severe winter storms.

There are now just under 40,000 pairs of nesting puffins across the eight islands.

A team of 11 rangers have spent two months sticking their hands inside thousands of burrows to count nesting puffins.

David Steel, head ranger on the Farne Islands, said: "It comes as a real relief following some difficult years for them - with the flooding of burrows last year and a very challenging winter."