England out of Women's Euros after 3-0 loss to France 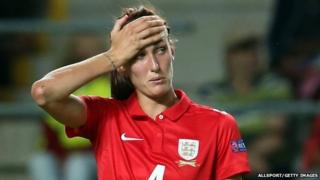 England have been knocked out of the Women's Euro 2013 tournament, after losing their final group game 3-0 to France.

France outclassed England - scoring in the first 10 minutes, and then twice in three minutes in the second half!

It means England finish bottom of their group with just one point from three games - from their 1-1 draw with Russia.

Coach Hope Powell has defended her role and said she wants to stay in the job.

"In 15 years we have made enormous progress," said Powell, who's been in charge of the senior side since 1998.

"I don't think we are drastically behind [other nations]."

This is England's worst Euros performance since 2001. The team reached the final at the last Euros in 2009.