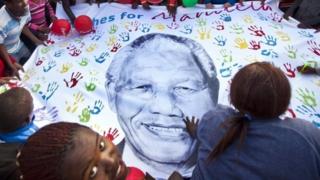 Celebrations have taken place all over the world to mark Nelson Mandela's 95th birthday.

The former South African president is still in hospital, in critical but stable condition with a recurring lung infection.

The day kicked off with millions of school children across South Africa singing Happy Birthday to Mr Mandela. 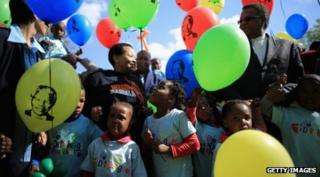 Mr Mandela's family held a birthday lunch with him and prepared 95 cupcakes.

South Africans were urged to volunteer for 67 minutes - to match Mandela's 67 years of public service.

18 July has been named Nelson Mandela International Day by the United Nations to recognise the former leader's work.

He spent 27 years in prison after protesting against the way South Africa was ruled, a system called 'apartheid' which kept white and black people apart.

It meant that black people in South Africa had fewer rights and couldn't vote. White people controlled what jobs black people could have, and even where they lived.

Mandela is now seen as being responsible for helping to end apartheid.

To many people in South Africa, and around the world, he's seen as a hero and is one of the most famous men on the planet.

For lots of people he is known as 'Madiba', after a South African tribe.

A spokesman for the political party he led, the ANC, described how important Mandela is.

"Madiba is the personification of humanity, friendship, honesty, integrity. He means all of these things to us", Jackson Mthembu said.

"Without the calibre of Madiba's leadership, the likelihood is that South Africa would have gone to ruins... He not only spoke to everyone, but spoke reason to everyone. That will be the legacy of Madiba."