Cleaners to mine for precious metals on UK streets 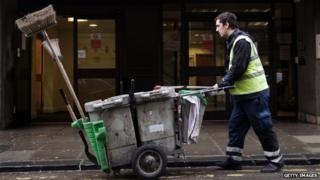 When you think of mining for precious metals, rummaging through rubbish off city streets may not be what you had in mind...

But bosses at a street cleaning firm believes they could find £1 million of valuable materials in the clear-up from Britain's streets.

The company plans to sift the dirt it sweeps from roads for metals like platinum, palladium and rhodium and fragments of gold and silver.

These metals often get onto the street from car exhaust fumes or rub off jewellery, shoes and clothing.

It's thought up to 1.5 tons of platinum, 1.3 tons of palladium and 0.8 tons of rhodium could be found every year in the 40 towns and cities where Veolia holds cleaning contracts.