Should sport clubs be separate for men and women? 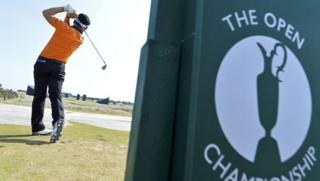 Lots of people are talking about The Open Championship which will take place in Scotland - but the debate isn't about sport...

The course that is hosting The Open — Muirfield — only allows male members.

This means that women can only play golf there if they have been invited by a man. Women aren't allowed to become club members.

Some people are so angry about this they say they wont go to watch The Open unless the rules are changed.

Maria Miller, Secretary for Culture, Media and Sport is not attending, she said: 'The Open Championship is the biggest tournament in golf and it sends out completely the wrong message for it to be held at clubs that don't allow women members."

She added, "sports governing bodies should be doing all they can to promote equality."

But organisers say they're doing nothing wrong as there are plenty of ladies-only golf clubs.

Should some sport clubs, like golf, be separate for men and women?

Or do you think that membership should be open to everyone?

"I think it should be open to everyone because men and women aren't really that different so why should women be treated differently? its not the Victorian times!"

"I think it should be separated into men and women because men are stronger and they always win but if its just women they might have more chance of winning."

"I think it should be open to everyone to show we are all equal and that girls/women CAN play sports."

"I don't think they should be separated, because it is very sexist!"

"Girls are very good at sport and shouldn't be separated from boys because they could learn from each other."

"Having men only golf clubs is basically like separating the white people from the black people which is not right."

"I don't think there should be separate sport clubs for men and women because it's unfair and it doesn't encourage both genders to mix, which should definitely be encouraged so that people can become more sociable. I think that there are many opportunities for men to mix with just men, and the same with women, without women or men being barred from these clubs."

"I think that in some sports men are better at than women, but I don't think because of that some clubs should ban women from joining."

"All clubs should be open for everyone, no matter if they are a man or a woman. It's not fair that some clubs are only for men as what do the women do if they want to go in?"

"No I don't think sport clubs should be separate for men and women, they will work better together."

"I think it should be open to everyone."