England scrape a 1-1 draw against Russia in Euros 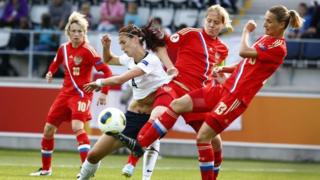 England scrape a 1-1 draw against Russia in their second group match of Women's Euros.

They were 1-0 down until the referee extended play to injury time, then Toni Duggan pulled them out of a loss.

This was their second group game at the Linkoping Arena in Sweden.

England lost their opening match 3-2 against Spain on Friday.

Hope Powell's team must beat France in their final Group C match to stand any chance of progressing to the last-eight.

MOTD Kickabout will have a special Women's Euros show every Saturday of the tournament at 7:40am, exclusively on the CBBC Channel.