Why does a motorway melt in the hot weather? 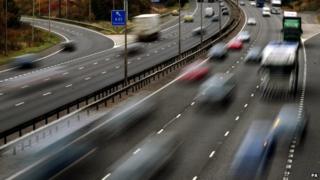 Police closed part of the M25 in London - one of the busiest roads in the country - after a road surface melted during the heatwave on Sunday.

But at what temperature do roads start to melt?

Dr Howard Robinson, chief executive of the Road Surface Treatments Association, says most roads in the UK which have an average amount of traffic will start softening at 50C.

Forecasters say temperatures are hitting 30C in some parts of the country - so that doesn't seem like it would be hot enough, does it?

But those temperatures are usually measured in the shade, and can often be measured up to 2 metres above the ground.

Ground hotter than the air

The temperature in direct sunlight on the ground can be much higher.

And dark road material, like tarmac, can absorb a lot of heat.

The typical summer ground temperature is higher than air temperature.

Robinson says roads "regularly" reach a temperature of 50C and above.

"Asphalt is like chocolate - it melts when it's hot, and goes hard when it's cold - it doesn't maintain the same strength all year round," he says.

However all road surfaces are not made of the same type of asphalt, or tarmac, which means different roads melt at different temperatures - so no need to worry your front street won't be melting away!