Like any other sport, it takes practise, determination and discipline - but you also need a lot of peas!

Traditionally pea-shooting was a school playground game, but competitors battling it out for the world title take it very seriously - some even use high-tech methods to up their game. 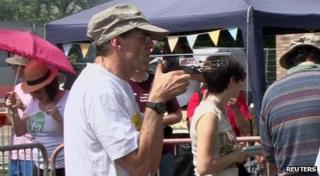 Some competitors are now using laser guides instead of a standard shooter.

"I think the laser guided guys have the edge on us because they know where it's going to go with the laser, while we've just got to judge it," said pea shooting judge Percy Walker. 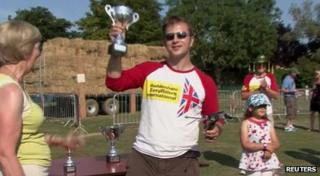 Reuters
Rob Bresler was the defending champion and won again

In this year's competition Helen Phillips won the women's title for the first time.

In the main event, the open draw, defending world champion and local father of two Rob Bresler took the trophy.