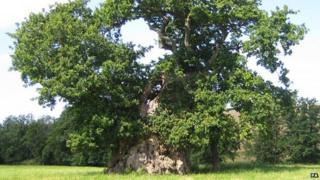 The government says it's watching the spread of a deadly disease that could kill thousands of oak trees.

Acute Oak Decline causes "stem bleeding" where a dark fluid seeps from splits in the bark.

Scientists think it could be caused by a beetle and it's on the rise in England.

A national survey's been commissioned as part of a new £1.1 million research drive.