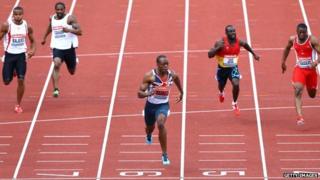 James Dasaolu clocked an incredible 9.91 seconds in the 100m semi-finals at the British Championships to become the second fastest Briton in history.

The 25-year-old ran the fourth fastest time of 2013, to break the championship record.

His time was so quick that not even Usain Bolt has run faster this year.

Former world and Olympic champion Linford Christie holds the record for the fastest Brit - he managed 9.87secs in 1993.