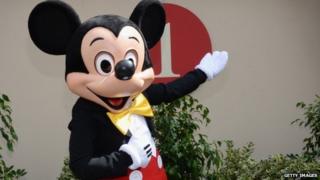 A lifeboat crew called to a rescue after reports of someone falling into the sea found a large inflatable Mickey Mouse instead.

A caller rang Holyhead Coastguard to tell them they thought they'd seen a figure falling in the sea.

A lifeboat was sent out to investigate and found the large cartoon figure instead - it seems someone was 'taking the mickey'...