The Islamic holy month of Ramadan begins on Saturday 2 April.

Ramadan is a very important time in the Islamic calendar, and Muslims all over the world will be preparing to take part.

Read on to find out more about what Muslims traditionally do during this month, and why it is so important to them.

During the month of Ramadan, Muslims won't eat or drink between dawn and sunset. This is called fasting.

Fasting is important during Ramadan as it allows Muslims to devote themselves to their faith and come closer to Allah, or God.

Fasting is one of the Five Pillars of Islam, which form the basis of how Muslims live their lives. The other pillars are faith, prayer, charity and making the pilgrimage to the holy city of Mecca.

Ramadan is also a time for spiritual reflection, prayer, doing good deeds and spending time with family and friends.

Normally, people will make a special effort to connect with their communities and reach out to people who need help.

At the end of the fast - when the sun has gone down - usually, families and friends will get together for iftar to break their fast.

The Muslim Council of Britain is advising families and friends to video call each other during iftar this year during lockdown.

Many Muslims also usually go to the mosque to pray, when lockdown restrictions aren't in place.

Some mosques have been holding virtual services online for people to watch together.

Why does it fall now?

Ramadan falls during this month because this is when the holy book that's followed by Muslims, called the Qur'an, was first revealed to the Prophet Muhammad.

Ramadan is the ninth month of the Islamic calendar, but the date changes each year.

This is because Islam uses the lunar calendar (based on the cycles of the Moon), so it isn't a fixed date in the Western/solar calendar. 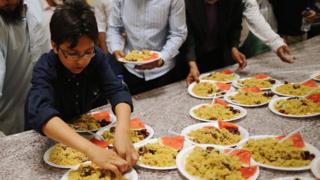 Getty Images
Iftar being served at a mosque
Does everybody fast?

Not everybody fasts during Ramadan.

Children, pregnant women, the elderly and those who are ill, or who are travelling, don't have to fast.

What happens at the end of Ramadan?

There is a special festival to mark the end of Ramadan. This is called Eid al-Fitr - the Festival of the Breaking of the Fast.

It begins when the first sight of the new moon is seen in the sky. 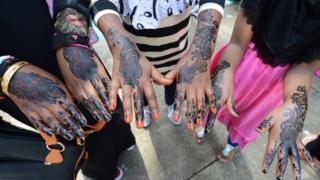 Muslims will not only celebrate the end of fasting, but will also thank Allah for the help and strength that they were given throughout the previous month.

Often children are given presents and new clothes.

Ramadan: Why is it so special?

What is Eid? What is the difference between Eid al-Fitr and Eid al-Adha?