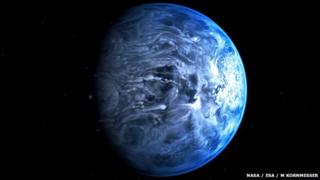 Astronomers have managed to determine the true colour of a planet 63 light-years from Earth.

The world, known as HD189733b, has a deep blue colour and experts reckon it's the result of glass rain in the atmosphere, which scatters blue light.

To find out what the planet looks like astronomers had to measure how much light was reflected from its surface.

Unlike Earth the alien planets blue-ish colour doesn't come from the reflection of an ocean.

Researchers say it's probably due to the unpredictable atmosphere being covered with glass-like particles - which scatter blue light.

Earth looks blue from space because the oceans absorb red and green wavelengths of light more strongly than blue and reflect the blue-ish colour of our sky.

HD189733b is one of the nearest exoplanets to Earth - from a distance it looks quite similar to our planet but it's actually a huge ball of gas.