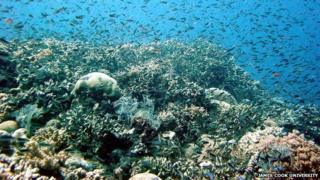 Australia's Great Barrier Reef is in trouble according to the country's government.

It says the conditions are 'poor' and that extreme events in recent years, such as cyclones and flooding, and the effects of climate change are to blame.

Scientists also say chemicals, used in farming, which find their way into the water have also had a big impact.

Poor water quality is bad news for the fish and sea creatures that live in this the world's largest coral reef.

But wildlife charity WWF say the reef can get back on the right track if the Australian government does more.

The Australian government has already tried to improve conditions in the reef, but hasn't achieved as much as it had wanted to.