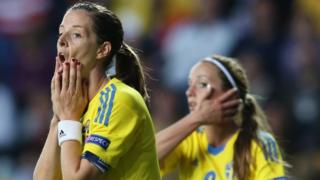 Hosts Sweden had two second-half penalties saved as they drew 1-1 with Denmark in their Euro 2013 opener.

The Swedish team are the third favourites for the tournament and created the majority of the chances.

Denmark went ahead after Mariann Knudsen found the bottom corner before Nilla Fischer headed in an equaliser.

Earlier, Italy and Finland played out a goalless Group A draw.

The Women's Euro Championship kicked off in Sweden on Wednesday.

England start their quest on Friday when they play Spain - and they'll aim to improve on their runners-up spot four years ago.

Germany are the favourites to win the tournament - they've already won the last five Euros!

They face the Netherlands on Thursday, aiming for a sixth title in a row. 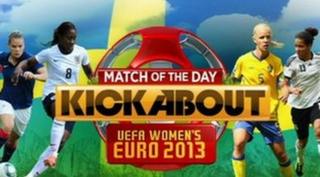 Make sure you watch MOTD Kickabout on the CBBC channel at 7.40 this Saturday morning for the first of three special Women's Euros shows.

Which teams are playing each other in the group stages?

Twelve teams are split into three groups, with the top two in each group going through to the quarter-finals along with two best second-placed teams.