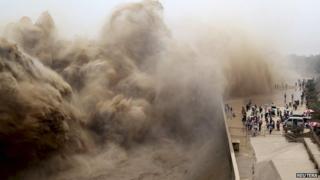 It might look like a scene from a Hollywood movie, but no need to worry - these huge waves are intentional - they're flushing out sand that's built up in China's Yellow River.

Vast amounts of water are allowed to gush from the Xiaolangdi Reservoir in China's Henan province, rinsing the silt from the riverbed.

It's done every year. The process helps move silt and sand that builds up on the river bed, which can slow the water flow and raise the level of the river, increasing the risk of flooding.

It's reported that a whopping 30 million tonnes of sand can get moved - that's about the weight of six million elephants!

Lots of people come to watch - but it's a good idea to take an umbrella as it could get a bit wet... 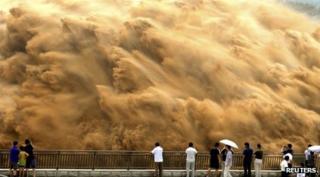 It's safe to watch, but take an umbrella!