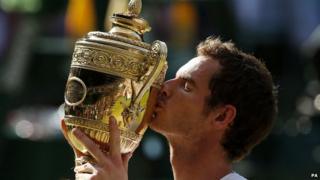 Andy Murray has beaten Novak Djokovic to become the men's Wimbledon champion, the first Brit to win the title in 77 years.

Andy thrashed the world number one in three straight sets, 6-4 7-5 6-4, in a match that lasted three hours and 10 minutes.

Murray had loads of fans cheering him on - 15,000 spectators were watching in Wimbledon's Centre Court as well as thousands watching on the nearby big screen.

Last year Andy got through to the Wimbledon final for the first time in his career, but was beaten by Roger Federer.