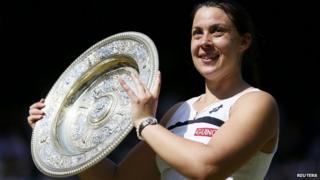 France's Marion Bartoli won the Wimbledon title with a 6-1 6-4 victory over Sabine Lisicki of Germany.

The French player was an unexpected winner after the usual big names like Serena Williams were knocked out early in the competition.

She had appeared 47 times before winning her first grand slam title.

Three time Wimbledon Champion John McEnroe said her triumph will encourage others to give it a go.

He said: "It absolutely will inspire millions who will all be thinking, 'Hey, anything is possible!'."

'It's a once in a lifetime opportunity'