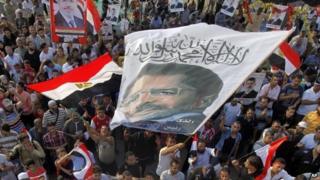 Egypt is a country in crisis, with no elected leader in charge after the country's president, Mohammed Morsi, was removed from power by the army in July.

In August, protests by thousands of supporters of Mr Morsi were met with violence by the country's police force, leading to many hundreds of people being killed.

With power swinging one way and the other in the country, the unstable situation is set to continue for some time.

What happened to President Morsi?

In July 2013, after several days of protests against him, the country's first democratically elected president, Mohammed Morsi, was forced out of power by the army.

People were demonstrating because they were unhappy with the way Mr Morsi was running the country, but there were also protests held by people who support him.

At first Mr Morsi was determined to stay, but the Egyptian army moved in and put him under house arrest.

They have brought in a temporary leader until an election can take place.

When did it start?

Millions of people took part in a demonstration on 30 June - exactly a year since President Morsi's first official day as leader.

He took over after the former president, Hosni Mubarak, was also overthrown after nearly 30 years in power.

The protests began because some groups believed Mr Morsi wasn't doing enough to help tackle the big economic problems or help people living in the country.

But there were still people who supported Mr Morsi, which led to violent clashes and some people died and many more were injured.

Why did the army get involved?

The Egyptian military is very powerful, and it decided to step in because it feared the protests were becoming too violent.

On 1 July the head of the army General Abdul Fattah al-Sisi, told Mr Morsi he should step down, and that he had 48 hours to do so, but he didn't so the army moved in.

What is a military coup?

A coup - pronounced 'koo' - describes a situation where there has been a sudden change in government because of action against the leader.

In the case of Egypt, some people are calling it a military coup, because it was the army that eventually forced the real change.

Who is the temporary leader?

The country's top judge - Adly Mahmud Mansour - has been announced as the temporary leader until an election can take place.

He was made head of Egypt's Supreme Constitutional Court - the highest court in Egypt - in May 2013, and before this he had been the deputy since 1992.