Murray makes it through to Wimbledon semi-final 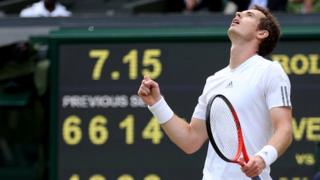 Andy Murray is through to the Wimbledon semi-final after a nail biting five set match.

It is the fifth time he has reached this stage in the competition but it wasn't easy.

He had to come from two sets down to beat Spain's Fernando Verdasco in a match that lasted three and a half hours.

After the match he praised his opponent and said it was good to get through to the next round. He said:

"There's been a lot of matches where I've been behind and managed to turn it round."

"I don't know if it is the most emotional match, but it was an unbelievable atmosphere and great to get through."